Why build my own game console? 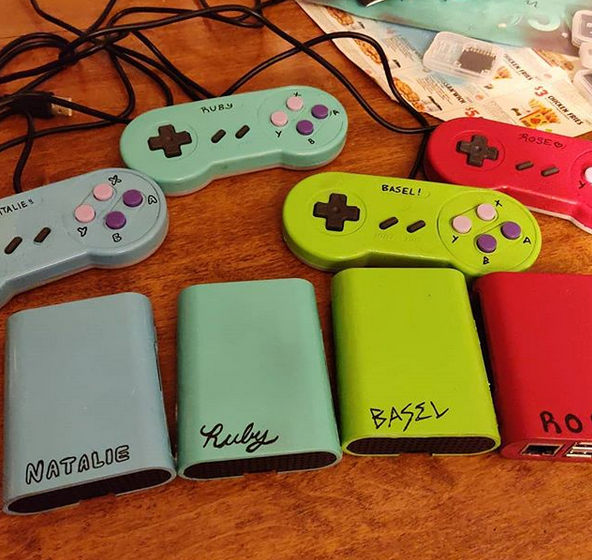 Last year, I had built 4 RasPi computers for kid friends, where I spray painted each computer case and gamepad for each of them their own colors. I had wished that I had made one for myself as well! On a whim a few weeks ago, I decided to buy parts for a RasPi computer for myself to begin building my own console in the wake of the release of the new Xbox and Playstation consoles.

Why make a game console?

I've been making games since I was 10 years old - not great games, but games. I started with PowerBasic, when at 12 I got a copy of Visual Basic 5 Learning Edition and made adventure games with that, and then at 14 began working with C++ and Allegro4. Besides sometimes having my sister or cousin play my games, the only time my games really got any play was when I took a laptop to a Maker Faire or other event, hooking it up to a monitor and an Xbox 360 gamepad, and letting people play my games there.

It is really cool to see people play your games, and something you just don't see much if you're one of those indie game developers who doesn't actually go to games events. I'm just a random human working full-time and making games on the side. I make more money (though still, not much) off my Esperanto zines and stickers than I do with any of my games - after all, people search more for "Esperanto Comics" than they do "Lenxion" or "Rawr Rinth" or any other random game title of mine.

Also this year, I've begun DMing DND sessions for my friends. I've been using Roll20, and making a lot of art and writing macros to build out these games. It's almost as if I'm the scripting engine and they're playing a very sophisticated computer RPG. One thing I've discovered is just how good it feels to prepare maps and items and character sprites, plan story beats, and then see my players experience it every two weeks - I've never gotten to experience this with any of my digital games.

It's been hard to be motivated to make anything for the past decade. I start on projects, prototype things, but I've only really finished one game - Gift Grab - and only because someone had paid me to build the original version with a different theme. They decided to not publish it, so I refunded them the money in exchange for the rights to reskin it and release it myself.

Otherwise, any time I think of a project, it's hard to get fired up over it because of the knowledge that "nobody is going to play this". I work full-time, I don't have time to do proper marketing. I don't know if anything I make would be interesting enough to get word-of-mouth "marketing". And really, I don't care to sell my work, it would just be nice if someone cared? In the meantime, it takes less time to write zines and make YouTube videos and people are more likely to see those - lower barrier to entry - so even though I always have a hunger to work on games, I have remained satiated with other projects.

This is all a very long justification but let me add one more thing. For the past three or four years I've had a family I've grown close to, including their four kids. It originally started as a volunteering thing; I would go around to different refugees' in Kansas City and fix their computers for free, via the KC For Refugees group. Another way to volunteer through this group is to be a sort of mentor or family friend to a family, and I'm very close with this family. I've seen them every weekend for the past three years, except for during 2020. I've still stopped by as much as I can safely, or otherwise done video calls with them to check in. Anyway, they have four kids that I've spent lots of time doing crafts with, teaching how to make zines, making movies and playing games with.

And, from my experience running DND for my friends, and being around these awesome kids, I don't really need the internet to play my games. I could find motivation making games simply for me and my group of friends. The only issue in my way was that it's a pain to take my laptop everywhere, and I had only one Xbox 360 controller to plug in anyway. After making the computers for the kids last year, I realized that I could do the same for myself, but have multiple controllers so I could play with three others at a time. I have a scrapbook paper box that fits the RasPi, a mouse, a floppy keyboard, the HDMI cable and adapter, the power cable, and four game controllers. It will now be so much easier to transport my games with this Vamoose project.

One last thought: In my early 20s I spent a lot of time and money collecting games and playing with friends. I had a SNES and PS1 and PS2 multitap, I had a collection of retro games, and I'd frequently have people over to play games together, like Champions of Norrath, or other multiplayer games I would find (but I remember CoN most fondly). I miss that experience, and I'm hoping that I can somewhat recreate that with Vamoose.

A collection of Rachel's games!